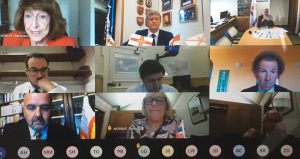 On 29 June Chief Minister John Le Fondré attended the latest meeting of the All-Party Parliamentary Channel Islands Group (APPCIG). The meeting, which occurred virtually for the first time in light of the travel restrictions brought about by the Covid-19 pandemic, featured Members from the House of Commons and the House of Lords, as well as representatives from Jersey, Guernsey, Alderney and Sark. The APPCIG aims to strengthen the relationship between UK Parliamentarians and the Channel Islands and promote a better understanding throughout Westminster of the issues facing the jurisdictions.

The meeting provided for a positive and productive discussion centred on the Channel Islands’ respective responses to Covid-19. The Chief Minister noted Jersey’s good progress in stemming domestic transmission and stated that Jersey was looking to move towards the final stage of its Safe Exit Framework, including the resumption of commercial flights within a Safer Travel Period.

The Chief Minister also provided an update over other key developments, including Jersey’s ongoing discussions with UK Government to secure the Island’s participation in both the proposed UK-EU Comprehensive Free Trade Agreement and third country Free Trade Agreements. The Chief Minister reported that the Government of Jersey has maintained good and open dialogue with UK counterparts, including those conducted through the Ministry of Justice in order to highlight the UK’s constitutional obligations as they relate to representing Jersey’s interests throughout the negotiations.

The Chief Minister also noted the Liberation 75 commemoration activities, which went ahead in early May through predominantly virtual means. He noted that they were necessarily reduced in scope and scale given the context of the Covid-19 pandemic, but expressed the desire, which was echoed by the APPCIG, to allow for a fuller return to commemorative activities in 2021.