Home › About Jersey › Jersey and the United Kingdom

Jersey and the United Kingdom 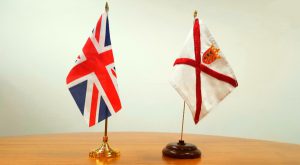 The United Kingdom is Jersey’s closest international partner. Deep social, cultural, economic and constitutional links between us have been built up and maintained over hundreds of years.

Jersey’s relationship with the English Crown began with the Norman invasion of England in 1066, after which William the Conqueror sat as both William I of England and Duke of Normandy, the latter of which Jersey was a part.

In 1204, when King John lost continental Normandy to the French King Phillipe-Auguste, the people of Jersey made the decision to remain loyal to the English Crown. In return for the Island’s demonstration of loyalty, King John granted Jersey numerous rights and privileges, subsequently confirmed in numerous Royal Charters, which are reflected in the level of autonomy we continue to enjoy today.

Jersey is not part of the United Kingdom and is not represented in the British Houses of Parliament. By charter and convention, the UK Parliament does not legislate for the Island without consent. The UK Government, on behalf of the Crown, retains formal responsibility for the Island’s defence and, to some extent, its foreign affairs. However, it is settled constitutional practice that the UK consults Jersey before it may bind the Island to obligations in international law.

In recent years, the Government of Jersey has held increasing responsibility for its own external relations. A framework agreement signed in 2007 recognised that Jersey has an international identity which is distinct from that of the UK. Accordingly, the Island has now signed a number of international agreements directly with foreign countries. In line with its growing international identity, Jersey adopted a new role of Minister for External Relations in September 2013 and now operates three overseas representative offices in London, France, and Brussels (the latter two of which are operated jointly with the Bailiwick of Guernsey).

The cultural links between Jersey and the UK have developed significantly since the end of the Second World War. Nearly a third of the resident population in Jersey were born in other parts of Britain meaning there are strong family links between this Island and the UK. The majority of international phone and digital traffic from the island goes to the UK.

Jersey has its own language, Jèrriais, a form of Norman French. It was the most widely spoken on the Island as recently as the 19th century. Today it is spoken by less than 3% of the population, although the Government is trying to encourage its regeneration through steps such as wider teaching in schools and dual language public signage. The established French language, also previously widely spoken, has declined as well. English is now the predominant language in Jersey.

Jersey has strong links with the UK business community and, in particular, the City of London in its capacity as an International Finance Centre. Jersey provides vital liquidity and makes a significant contribution to the UK’s economy.

Independent research demonstrates that Jersey adds a net £14 billion to the UK economy every year, supporting an estimated 250,000 British jobs. This economic benefit is dependent upon Jersey’s independence in setting political and fiscal policy. Jersey’s banks attract over £80 billion of funding from markets outside the UK sterling zone and provide 1.5% of the funding of the whole UK banking sector. The Island is also a conduit for almost £0.5 trillion of foreign investment into the UK, much of which might may not reach the sterling zone otherwise.

Jersey necessarily imports an array of goods and services to meet the needs of the population. The vast majority of these imports come to the Island from the United Kingdom. Reciprocally, the UK is also a major export market for many of the goods and services provided by businesses and industries in Jersey, including high-value produce such as Jersey Royals, oysters, and dairy products. The majority of Jersey’s communications links (flight paths, shipping routes and digital traffic) are with the UK.

Jersey is not in a formal currency union with the UK and therefore monetary policy is set by the Bank of England. The Jersey pound is a transactional currency, tied to the pound and wholly backed by sterling reserves. Both currencies can be used and spent by visitors on the Island.

Jersey is part of the Common Travel Area (CTA) which allows free movement of people to and from the UK, the Republic of Ireland, Guernsey and the Isle of Man. Passengers are not required to go through formal passport checks when travelling within the CTA, although airlines will require some form of photographic identification. Providing that a passenger is lawfully in the UK and travelling according to immigration permissions, no separate visa is required to travel to Jersey.

People travelling to Jersey from European Union (EU) and European Economic Area (EEA) countries also do not require a visa to visit the Island, although they must show a valid passport or (in some specific cases) an identity card at immigration control on arrival.

Immigration controls for entry into Jersey via non-CTA channels follow the same procedure and level of enforcement as any UK entry point.

If you are interested in visiting the Island, please visit the Visit Jersey website for more information.