The Bailiwick of Jersey, the largest and most southerly of the Channel Islands, is a self-governing dependency of the Crown. It has a surface area of 45 square miles and is home to around 105,000 people. The Island sits 85 miles off the south coast of England and 14 miles from the northwest coast of France.

Jersey has its own parliament (the States Assembly), laws, courts, currency, and tax system. The relationship between Jersey and the Crown is one that derives from the British sovereign’s capacity as heir to the Dukes of Normandy.

The Queen is the Head of State and the Lieutenant-Governor acts as Her Majesty’s personal representative. Jersey is autonomous in all domestic matters. It is not a sovereign state, but is not and has never been part of the United Kingdom, a British colony or a dependent territory.

Jersey has also never been a member of the European Union. Instead, during the UK’s membership, the relationship between the Island and the EU was governed by Protocol 3 to the UK’s 1972/73 Treaty of Accession. That Protocol fell away at the end of the UK’s Transition Period in December 2020. Now, Jersey participates in goods and fisheries aspects of the Trade and Cooperation Agreement between the UK and the EU, which came into effect from January 2021

The Island has its own democratically-elected parliament, the States of Jersey Assembly.

There are 49 elected members of the States: 8 Senators (elected on an Island wide mandate), 12 Connétables (representing the parishes of the Island) and 29 constituency Deputies. General Elections are held every four years with the next due in 2022. The majority of States Assembly Members sit as independents. There is one registered political party in Jersey called “Reform Jersey”, who currently have five Assembly Members.

Jersey’s flag is a red saltire on a white field, with a badge of Jersey surmounted by a yellow Plantagenet crown

Key functions of the States Assembly include:

The Assembly is also responsible for electing the Chief Minister and Ministers (on an individual basis), as well as the chairmen and members of various parliamentary committees and scrutiny panels which play an important role in holding the government to account.

A ministerial system of executive government was introduced in 2005, replacing the previous committee structure. The Government of Jersey is headed by the Chief Minister, supported by a number of Ministers and Assistant Ministers, whose functions are assigned under the States of Jersey Law 2005. The cabinet is known as the Council of Ministers.

By long-standing convention, the Crown is generally responsible for Jersey’s defence and representing its international interests, however, treaties may only extend to Jersey were the Island has given its express consent to be bound by any international commitments.

Since the beginning of the 21st Century, Jersey and the other Crown Dependencies have taken greater responsibility for asserting and promoting their separate international identities, both through the making of international agreements (under entrustment from the UK government on behalf of the Crown), and participation in international fora. UK support for the furtherance of Jersey’s international identity was expressed formally in a Framework Agreement between the Island’s Chief Minister and the UK Secretary of State for Constitutional Affairs in 2007. 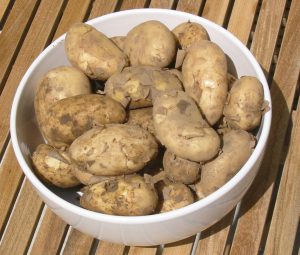 Jersey Royal potatoes are enjoyed around the world

Throughout its history Jersey’s economy has undergone regular significant transformations to remain relevant and competitive. Cider was the Island’s main export up until the 19th century, while a thriving woollen garment industry also existed throughout the 17th and 18th centuries. During the 19th century, Jersey was the fourth largest shipbuilding area in the British Isles.

Agriculture remains an important part of Island life with farmland accounting for over 50% of Jersey’s land surface. The main crop is the world-renowned Jersey Royal potato, while Jersey is also the home to the famous Jersey breed of dairy cow. The high quality of milk and potatoes are a source of local pride on the Island and both continue to attract consumers all across the world.

Tourism remains a vital part of Jersey’s economy. With its proliferation of unspoilt sand beaches, diverse and dramatic landscapes, high quality restaurants, historical landmarks, unique variety of wildlife (including green lizards and red squirrels), Jersey continue to welcome visitors from across the globe. In 2018, there were almost three quarters of a million visitors to the Island, and that figure is expected to reach one million by 2030.

Over the past fifty years, however, Jersey’s economic success can be most greatly attributed to the growth of its financial services industry. The Island has positioned itself as one of world’s leading centres for financial and legal services, with particular specialism in the formation of trusts and family offices, facilitation of high net-worth individuals, and provision of structuring for global investment.

With an extremely stable political system, a long-established legal system and strong adherence to the latest international standards of regulation and information exchange, Jersey is ideally suited as a destination for global clients to do business and manage investments.

Around a quarter of Islanders are employed in financial services or its derivative sectors, and the industry contributes as much as 40% of the Island’s economic output. Meanwhile, the Island’s industry trade body, Jersey Finance, has sought to enhance the sector’s overseas reach with offices in Dubai, London, and New York hoping to attract investors and businesses by promoting the island’s safe, ethical and secure financial environment.

Jersey’s economy continues to adapt and modernize in order to thrive. In recent years the Government of Jersey has made a concerted effort to develop its rapidly growing digital sector and is swiftly gaining a reputation as an international hub for digital and financial innovation. This includes the recent milestone of full-fibre connectivity for every home in Jersey.

Jersey’s history and international outlook gives the Island a rich and unique cultural identity, with strong British and French influences. The Island uses its own variation of Sterling (including paper one pound notes), and has its own language, Jèrriais, which was the majority language as recently as the 19th century. The Government is focussed on efforts to support the ongoing use of the language through use in public space and teaching in schools.

Jersey’s coastline also bears the hallmarks of its storied history, ranging from Mont Orgueil castle, built at the beginning of the 13th century, to the Round Towers  of the Napoleonic wars, which continue to dot the shoreline. The Island’s coastline also features the extensive evidence of German fortifications built as part of Hitler’s Atlantic Wall during the occupation of the Channel Islands between 1940 and 1945. 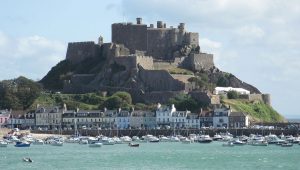 Jersey is a multicultural and welcoming island, where various  communities have established themselves, including sizeable diaspora communities from Portugal (particularly Madeira), Poland, France and South Africa, to name a few.

The Island is divided into 12 parishes. The civic head of each parish is known as the Connétable (Constable). The parishes play a key part in community life. Each parish operates its own Honorary and elected police force which helps to maintain order in the parish and works closely alongside the full-time States of Jersey Police force to support major Island and parish events. The Parish Hall enquiry services is also an effective and informal means of addressing social issues in a holistic and personal way for the benefit of all Islanders.