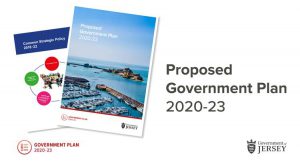 Ministers have published their first-ever Government Plan for Jersey. The plan brings to life the five strategic priorities that the States Assembly unanimously approved for this Government’s term of office, and it brings together the Government’s proposals for both income generation and spending.

The plan proposes a range of detailed, costed initiatives that will pave the way to fulfil Ministers’ collective ambition for the Island’s future. It brings together income and spending decisions, improves how funding decisions are made, and makes these decisions more transparent.

The Chief Minister, Senator John Le Fondré, said: “We want to make an enduring difference to Islanders’ lives and to our unique Island, to meet our five important pledges. We have considered every potential activity and the contribution that each will make to meeting our five strategic priorities.

“The Government is committed to ensuring the sustainability of our public finances and the long-term funds that are essential to supporting the economy in the event of a downturn and ensuring care in old age for those who need it.

“The Government is also committed to balancing the budget, after making transfers to the Stabilisation Fund, and to keeping taxes low and broad. While we are increasing spending in the Government Plan, our prudent planning, backed by sustainable efficiencies, keeps our forecast spend after efficiencies below what was originally forecast in Budget 2019. We are ensuring that what we do can be paid for, without placing undue burdens on islanders.

“We are also planning to invest £91 million in the fabric of our Island in 2020, and £349 million in capital investment over the next four years. This first Government Plan is a plan for action, for sustainable investment, responsible spending and for the long term. We are taking the important decisions now to tackle the future needs of our Island, creating a positive long-term legacy for Islanders.

“This is a plan that Ministers, the public service and, I hope, the States Assembly along with all Islanders, will join together in delivering for our long-term future.”

This Government Plan shows how areas of new investment were required after the Medium-Term Financial Plan was agreed, for example to fund the recommendations of the Independent Jersey Care Inquiry.

Unspent budgets from previous years and contingency funds were used to increase the 2019 Budget of £735 million to £800 million to meet these extra spending pressures.

The Government proposes increased spending in every year of the Government Plan, with departmental spending of £924 million in 2023. However, after careful planning, backed by sustainable efficiencies worth £100 million a year by 2023, the forecast spend after efficiencies will remain below what was originally forecast in Budget 2019.

The Government has also allocated £90.6 million in 2020 and £349 million in total to capital projects over the period of the plan, to invest in the fabric of the Island.

This Government Plan is set against a backdrop of the most uncertain economic environment for a decade, with uncertainty surrounding Brexit, and wider economic, trade and political uncertainties across the globe.

Economic forecasts for Jersey remain robust for 2019 and the economy is expected to remain buoyant over the next five years. While the economy slowed in 2017, it still delivered a fourth consecutive year of growth, after a period of decline from 2008 to 2013.

The Fiscal Policy Panel has estimated GVA growth of 1.6% in 2018. Employment grew by around 1.5% and earnings grew by 3.5%, although strong inflation meant that real wages fell.

Output of the financial services sector grew by 2.2% in real terms, the first year of growth since 2014.

Jersey’s non-financial sector saw a fifth year of robust growth, although the financial services sector contracted in 2017, mainly driven by falling profits in several banks with a relatively small presence in Jersey.

However, the wider global environment could have a significant impact on both the resources available to Jersey’s Government, and on the demand for the services it provides. This Plan allows flexibility to respond appropriately to any such changes in circumstances.

The Fiscal Policy Panel recommended putting additional funds into the Stabilisation Fund, to rebuild it to an appropriate level.

The Government Plan prepares for future economic risks by investing £84 million over the next four years to replenish the Stabilisation Fund, with annual transfers from income and an additional £20 million from reserves in 2020.

The plan proposes balanced budgets, after allowing for transfers into the Stabilisation Fund.

The Government Plan also prepares for the rising cost of care in old age by increasing the Long-Term Care Fund contribution rate from 1% to 2%, and extending the income cap applied. This will raise around £24 million of ringfenced funds in 2020, which are not available for general Government spending.

The latest income forecast shows an increase in general tax receipts for each year of the forecast, compared to the previous forecast produced in September 2018. This is mainly due to more income than previously predicted from corporate income tax and GST, and stronger economic assumptions provided by the Fiscal Policy Panel, particularly for the later years of the Government Plan period.

In addition, a change in accounting has brought forward the recognition of some personal income tax by one financial year.

Delivering the Government Plan priorities requires substantial funding and investment over the next four years. To achieve this without significant increases in taxes, the Government will transform the way in which it delivers public services, and do more with less.

The Government has established an Efficiencies Programme, to deliver £100 million worth of savings over the four years of the Government Plan. More effective and efficient public services will help to fund both new commitments and ongoing initiatives, reducing the amount of additional revenue that the Government will need from taxpayers.

The programme will modernise, improve and transform services for the benefit of Islanders, and will help to instigate a culture change across Government, putting service transformation and value for money at the heart of all decision-making and planning.

This will be achieved through:

The efficiency target for 2020 is £40 million, delivered through the new Government structure, improved collection of income, a review of 2020 spending and rapid reviews of processes.

The first £20 million of efficiencies have already been identified, and a plan will be presented to the Council of Ministers in October 2019, setting out how the full 2020 efficiencies will be delivered, including the proposed impact on departments’ budgets. The plan will also set out the approach to delivering efficiencies over the remaining Government Plan period. This will be made available for the States Assembly before the Government Plan is debated.

Long-term structural measures for consideration in 2020

The Government Plan also contains the Budget 2020 measures, which are summarised below:

These contributions are not available for general government spending.

The Government is proposing targeted increases in alcohol, tobacco and road fuel duty, raising around £6 million in 2020, to encourage Islanders to drink and smoke less, and to consider how they travel and commute.

Considering these increases, alongside increases in income tax allowances worth around £6 million in 2020, taxpayers would be paying similar amounts in extra duty as they would be saving through allowances.

The Strategic Reserve currently holds £848 million and is forecast to hold more than £1 billion by the end of 2023. This reserve forms a critical part of financial risk management and helps to protect the long-term financial sustainability of the Island.

The Stabilisation Fund exists to support the Island through major economic shocks, such as the effects of the financial crisis. It currently holds £50 million and the Government is acting on the Fiscal Policy Panel’s advice to replenish the Fund. £36 million will be transferred into the fund in 2020, followed by £16 million annually for the remaining period of this plan. Further transfers will be considered in future if these are affordable.

The Social Security (Reserve) Fund currently holds £1.8 billion. This fund is used to manage the impact of an ageing population on future pension costs. Consideration is being given to changing the investment strategy of the Fund to allow it to invest in local infrastructure, providing benefits for the Island as well as a good return on investment.

In the Common Strategic Policy, the Government and States Assembly pledged that: