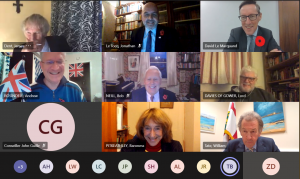 On 2nd November Jersey’s Minister for External Relations, Senator Ian Gorst, attended the latest virtual meeting of the All-Party Parliamentary Channel Islands Group (APPCIG). The meeting was chaired by Andrew Rosindell MP and featured Members from the House of Commons and the House of Lords, as well as representatives from Jersey, Guernsey, Alderney and Sark. The APPCIG aims to strengthen the relationship between UK Parliamentarians and the Channel Islands and promote a better understanding throughout Westminster of the issues facing the jurisdictions.

The meeting provided for a valuable and productive discussion focused on the Fisheries Bill, with deep concerns expressed by representatives of Jersey and Guernsey on the inclusion of the Permissive Extent Clause (PEC). The use of PECs in relation to the Crown Dependencies is both extremely rare and based on an established principle of prior consent.

Senator Ian Gorst provided updates over other key developments, including the Island’s response to the Covid-19 pandemic. He noted the recent publication of the Government of Jersey’s winter strategy, which aims to remind the public over the risks of the virus and pursue a balance of economic and public health considerations. In addition, Senator Ian Gorst touched on Jersey’s participation in the ongoing EU-UK Future Partnership negotiations and emphasised the importance of the EU and the UK reaching a deal for Jersey’s interests. Members of the CI APPG expressed their approval of the robust and successful approaches of Jersey, and its fellow Channel Islands, with respect to these developments.